To the land where things ferment

We rolled over the Diama dam and got all of about three feet into Senegal before having to make our first payment: the bridge toll.  Although to give him credit, we did get a proper ticket and receipt – unlike the next person in line, the frontier policeman, who simply refused to stamp our passports until we gave him 10 euro each.  Receipt?  Of course not – everyone just pays up.  Here, I’ll show you: look at my big drawer full of cash. 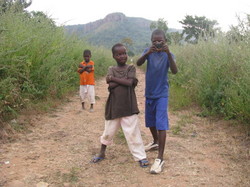 But as it turned out, he was the only person we came across in Senegal who wanted to do things that way.  Contrary to popular traveller misconception, every other traffic policeman, customs official and gendarme was friendly and correct (if sometimes a little busy on their mobile phone to do much more than wave our paperwork in the air for a bit).  And as in Morocco and Mauritania, pretty much everyone else we met was chatty and helpful too.

Other things really did seem to change, though, as soon as we’d crossed the Senegal river.  The landscape was much greener, lusher; there were trees everywhere; and there were monkeys running across the road.  The kettles were made of stripy plastic now. 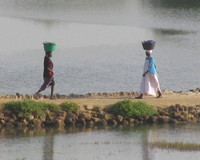 The people were all properly black and looked seriously West African – women in incredibly bright patterned fabrics carrying everything on their heads, boys in football kit practising madly for their lucrative futures in the Premiership.  And the food was definitely different.  Here, it was all about the fruit juices.  The savoury condiments, the grains, the baguettes and the viennoiserie.  And above all, the joys of fermentation …

Our first stop was just round the corner in Saint-Louis, where we got stuck straight into our fermentation experiments via a few cold beers.

(Great as the previous couple of countries had been, there’s not a huge amount of alcohol around in Morocco, and even less in the Islamic Republic of Mauritania).  We also encountered our first pain au chocolat since France, thanks to Boubacar at the Hotel Cap Saint-Louis who gave Anna a proper viennoiserie lesson.

And we tried our first “jus locaux” – freshly made ginger juice (zingy and spicy), tamarind (sour and refreshing), bissap (hibiscus flower – fruity and dry), bouye (baobab fruit – chalky, sweet and thick), and ditakh (fresh and cucumbery).  We didn’t realise it at the time, but these would become one of the constant themes for our West African adventures – you’ll find most of them being sold on the street all the way to Ghana, and they’re delicious.

Saint-Louis is a fascinating place for food, as you can see all the various influences from its French history and its location in the middle of things: there’s food from Guinea, food from Vietnam, and great colonial dishes which remind you of US Cajun specialities (shrimp beignets, anyone? yes please).  And there’s fish everywhere, most particularly the classy stuffed poisson à la saint-louisienne and the versatile and tasty thiof, king of all Senegalese fish.

And then, of course, there’s the other kind of fish: the fermented kind.  Back in Nouakchott we’d come across Lebu fishermen who dry, salt, smoke or just ferment their catch, and we knew they originally came from around here.

And indeed, on the western side of town there’s a Lebu village full of fish: coming in on slender, brightly painted fishing boats, salting in big barrels, drying on racks and being loaded into enormous trucks to be taken to Dakar and far beyond.  It’s not the sweetest-smelling village, but it’s a hive of fascinating fish preservation activity.

It wasn’t (quite) all about food, though – we played with crabs on the beach, watched football games in town, and visited the local national park.  Being the mouth of the Senegal river, it’s full of bird life here; beautiful to watch, but sad to learn (from our excellent guide Seck) that it’s disappearing very fast as a newly dug anti-flooding canal has diverted the water flow.

None of these birds may be here the next time we visit.  Go now!  And stay at the lovely Zebrabar on the edge of the estuary – just don’t believe all the overlanders’ tales of police corruption and border crossing nightmares you hear at the bar.

From here we headed south, straight to Dakar, where we had an appointment to meet Bineta Diallo: ex-owner of the traditional Point d’Interrogation restaurant, tireless organiser of local food and nutrition projects, Slow Food powerhouse and general fount of knowledge and whirl of energy.

And we’re extremely glad we did – Bineta taught us huge amounts about Senegalese food, ingredients, cooking methods and recipes. 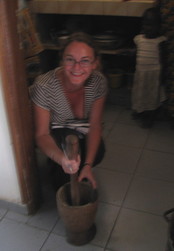 She introduced us to the wonders of thiéboudienne – Senegal’s elaborate national dish of rice and fish – its beany cousin thiébou ketiakh, peanutty mafé stew and the versatile bissap plant.  She explained the grain issue – too much imported ever-more expensive rice, too little cooking of nutritious traditional grains like fonio, millet and sorghum.  Not to mention introducing us to our third kind of Senegalese fermentation: nététou, a condiment made by fermenting the seeds of the néré
tree – deliciously savoury and something we’d be seeing in various guises across West Africa.  Basically Bineta fired us with enthusiasm for West African cuisine.  We hope we’ll meet again soon.

And we’re very glad we came to Dakar – contrary to our expectations it’s a friendly-feeling place, with a small old centre and a very pleasant seaside climate. 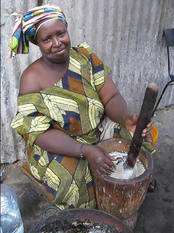 It’s the kind of place you meet people easily: within ten minutes of parking our car we were discussing aubergine-grilling with Boniface, and within a day or two we’d covered patisserie with the Ducasse-trained Maxime Attye and had spent several sessions learning how to cook niébé beignets (think savoury bean doughnuts) and fataya (think crunchy samosas) with the queen of Dakar street food, Bintou Coly.

It’s full of good live music, too, and hanging around listening to it in nice outdoor garden bars like the Institut Français and Just4U.  For once we actually coincided with a festival: the Île de Gorée Diaspora Festival, where we witnessed the coming of the Prince of Mbalax himself, Alioune Mbaye N’der, as he whipped the crowd of excited grannies and fainting teenagers (really) into a frenzy.

And we nearly caught Senegal’s sad loss to France in the final of the 44th World Pétanque Championship, but were just too busy further along the beach teaching children how to play noughts-and-crosses.

Of course we also spent a fair amount of time searching out the best restaurants and street stalls.

Eventually we left to head east (we’ll have to go back one day, though, if only for the great thiéboudienne at that stall behind the market) towards Tambacounda. 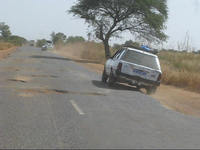 We stopped in Kaolack, pleased with our progress after starting out customarily late, but then the road deteriorated into by far the worst that we’ve come across: dirt tracks and pistes are plain sailing compared to this sequence of deep potholes linked together by annoyingly hard thin strips of tarmac. 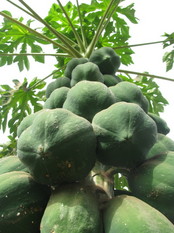 Amazingly, this is Senegal’s main east-west artery and the road to Mali, used by hundreds of poor lorry drivers every day, most often seen trying to fix their broken beasts by the side of the ‘road’ in the red dust and serious heat.  They all seemed to be carrying truckloads of rams, who couldn’t have been enjoying the ride much either – although probably more than they’d enjoy Tabaski, the imminent ram-killing-and-eating festival they were being delivered to.

Averaging about 25 km/h meant we had to split the 300km left into two days, which initially seemed like a disadvantage, but actually let us spend a day in Koungheul at Le Bambouk, learning all about tapalapa bread, about the exotic vegetables, fruit and medicinal trees in Ibrahim’s garden and about the guedj, the kedjakh (yes, you guessed it: fermented fish) and yeet (no, you probably didn’t guess it: fermented sea slugs) in the market with Moustapha.

By now we were familiar with these, and the standard assortment of condiments found in Senegalese markets – usually sold in tiny packets/bags/lumps/piles to suit the requirements of one family’s marmite and the limitations of their daily budget.  There is always tomato concentrate; peanut paste and oil; nététou (in various forms); fresh chilli; dried powdered baobab leaf, okra, and shrimp; dried onion balls; and then the fishy things. 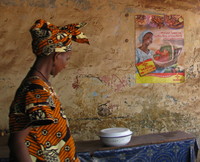 And there is always, always Maggi.  Or Jumbo, depending on whether you see yourself as a woman of “goût” or “bonheur“.  The Maggi and Jumbo seasoning cube marketers must be the most successful on earth, so pervasive is their reach.  Maggi and all, these were to be the flavourings we would come to know and love in all their various permutations in West African cuisine.

We had time to learn about Senegalese tea, too, when we stopped for a glass with a friendly Gambian Tabaski-ram buyer and a Fulani cattle-herder.  Good thing we weren’t in a hurry – making each glass took upwards of half an hour, and you have to have three.  The whole thing’s very similar to Morocco (the little glasses, the important froth, the mountain of sugar, and green tea – quite unlike the black stuff they drink in Turkey) but here it’s a more robust man’s drink – none of those wimpy herbs, and no throwing out that first bitter brew.

Once we finally made it to Tambacounda (car loaded with various spices), we could head south to Kédougou (car towing a minibus with a motorbike on top) and the hilly, lush south-east, near the Guinean border.

Here, people don’t speak Wolof as in most of the rest of the country – the villages are full of Bassari, Fulani and Bédik people.  We spent some time in Dindefélo in the Le Dogon campement (a community project run by enthusiastic young men), swimming in waterfalls and buying Guinean cloth from Guinean traders in the market (they’re allowed to just walk across the border, even if we weren’t). 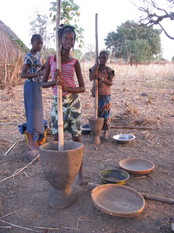 And we hiked up the cliffs to Dandé and Afia where we learnt all about curdled milk couscous, and the old-fashioned (and until recently, wild) grass-like grain fonio: how to steam it, how to eat it, and most importantly how to get the husks off by pounding it for hours (you need to start at 5 in the morning) in enormous pestles.

We visited the beautiful Bédik village of Iwol too, where the people are animist or Christian rather than Muslim, and so indulge in two of our favourite kinds of fermentation: the production of cidery millet beer and refreshing palm wine.

A quick hop back further north to find the good tarmac road east, and a night in Goudiry spent satisfying our hunger for Senegalese street food (excellent thiébou yapp – translating it as “rice with meat” really doesn’t capture it), and it was time to cross the river into Mali.  Would the “rice with meat” there measure up?  It wouldn’t take us long to find out …