This is my favourite way to cook lamb shoulder.  Your lamb will be meltingly tender, juicy and full of flavour.  You can keep the shoulder whole and present it at the table.  You won’t need a carving knife – just spoons and forks to pull off pieces of soft meat.  Or you can remove the meat from the bones after it has cooked (as described below) and serve it individually plated.  You could pair it with mashed or roast potatoes, a root vegetable gratin, or rice.  I think it’s particularly delicious with barley or spelt ‘risotto’, with a dose of salsa verde on top. 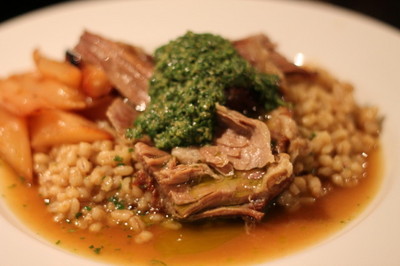 The recipe takes some time, but is far from difficult.  It’s based on the method I used at Chez Panisse, where we cut the shoulders from the lamb carcasses, trimmed and seasoned them the day before.  For best results I recommend starting two days in advance.  On the first day, trim and season the meat.  On the second, cook it, remove the bones and strain the sauce.  On the third, skim off the remaining fat and reheat gently.

Serves:  6-8 depending on size of shoulder