Something to do with tea 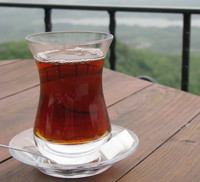 As we’ve been collecting recipes in the various countries we’ve travelled through, we’ve noticed that not only does the food itself change as we move, but the way of talking about it changes too.  People tend to measure volumes, for example, in terms of the utensils they’re used to and have handy.  In the UK people might talk about pints; in the US, they tend to think in cups.  Here in Turkey, they talk about glasses and cups – but, of course, they’re Turkish glasses and cups.

This means they’re much nicer to look at.  It also means they’re not the size you expect (even if you recognise the name).  And, of course, it means we need to work out what to call them.

In terms of size, a “water glass” might be pretty obvious – it’s the glass you’d drink water out of at mealtimes, and is something like a US cup.  But a “coffee cup” is nothing like the cup an average English speaker might use for coffee – it’s the tiny little cup you drink Turkish coffee from.  Most pleasing is the “tea glass”, which is the graceful tulip-shaped glass you see everywhere in Turkey, and is somewhere in between water and coffee (in terms of volume, that is – although you could probably say the same about the taste sometimes …).

The same goes for spoons: a “dessert spoon” here is much smaller than something of the same name in England – in fact, it’s probably what we’d call a teaspoon, because that’s what you eat your dessert with here.  A “tea spoon”, on the other hand, is really tiny.

But just when you thought you’d got away without any linguistics this time, the really interesting thing about tea glasses and tea spoons is not their size or beauty, but their grammatical features.  How do we express the relation between “glass” and “tea”? 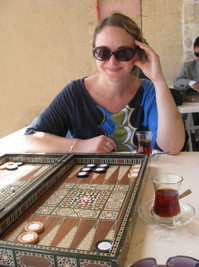 In English, it’s easy: you just stick the two words next to each other: a glass that’s something to do with tea is just a “tea glass”.  This relation doesn’t have to be about containing tea, of course; a garden that’s something to do with tea (for sipping it in while playing backgammon, perhaps) is similarly a “tea garden”.  German can do the same, of course, and you even get to put them in the same word: Teeglas or Teegarten.

But many other languages can’t – you need some sort of preposition or inflected ending to indicate that one word (glass) is the actual thing (the “head”), and one (tea) is the thing that it’s something-to-do-with (the “modifier”).  Try asking a French waiter for a thé verre and he might look at you in a condescending manner (I’m just guessing here); asking for a verre à thé might (perhaps) get better results.  A language which uses endings (like Latin) would require an ending on the modifier, giving you something like a “tea-y glass” (not that I can’t be bothered to look up the actual Latin words here.  Did the Romans even have tea?  Hope not).

And this is where Turkish has taken me by surprise: it takes the ending route – but the ending’s added to the head rather than the modifier.  So rather than a tea-y glass, we have a tea glass-y.  Or in fact, a çay bardağı.  For spoons, a çay kaşığı.

Just as in English, the relation expressed this way doesn’t have to be something specific like “containing” – it’s just the vague “something-to-do-with”.  For example, the börek pastry associated with the Laz people of north-eastern Turkey is Laz böreği.  (Yes, it’s a i at the end this time, not a ı – don’t forget the vowel harmony!)