We found ıspanaklı ve peynirli börek to be as common in Turkey as spanakotyropita is in Greece, and made a point of sampling as many as humanly possible, purely in the name of research of course.  They are essentially the same dish – a savoury pie made of multiple layers of ultra-thin pastry with a spinach and cheese filling.  Sometimes it’s just spinach, or just cheese, but I like it with both. 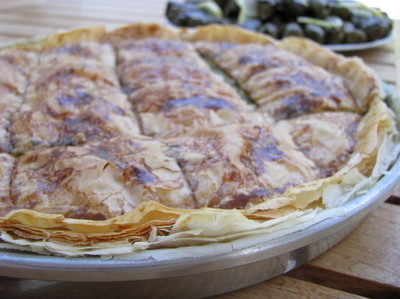 They come in various shapes and sizes, depending on which country, region, town, village, bakery or home you’re in, and with different fillings.  The form here is nice and simple and works with the packets of filo dough we can find in shops in the UK.  I have made the filling purposefully generous in quantity and moist in consistency as I don’t like my börek dry.  The recipe is loosely based on two very different versions I had the opportunity to make with chefs in Turkey and Greece – Engin Akin in Istanbul and Dimitris Mantsios in Naoussa.

In Istanbul I made kol böreğı with food writer and cooking teacher Engin Akin, so called because they look like arms – each one is made of a large round of fine yufka dough (like filo), rolled up into a long sausage and then laid into the baking tin with one end bent round, as if bent at the elbow.  We’d come across a wide variety of dishes in Turkey with börek in the name – a query I put to Engin.  But Engin’s a staunch traditionalist:  “To be börek it must be savoury and must be made with yufka.”  That settled that then.

In Macedonia I marvelled at how ‘Naoussa style’ spanakotyropita was made by local chef
Dimitris Mantsios and his sister Pigi – two balls of soft dough were cunningly coaxed into a multi-layered pie by an unusual technique involving lots of stretching, a sun and rays cut out and copious quantities of butter and oil.

Dimitris later proudly pulled the pie from his wood-fired oven outside, beautifully puffed and bronzed, beaming broadly and softly muttering his culinary catchphrase, “Oh, I like it too much!”

The Turks claim that the börek is originally Turkish, even preceding the migration of the ancient Turkic tribes from Central Asia to Anatolia.  There are all sorts of culinary disputes between Greece and Turkey – who invented what first, who makes the best X, etc.  This claim seems to be accurate; some ‘pita’ in Greece (‘pie’) is also known as ‘boureki’, and there are similarly named and formed pies all over the former territories of the Ottoman empire, from present-day Ukraine to Crete, Morocco to Iran.  When you make it you’ll realise why it’s been so popular… 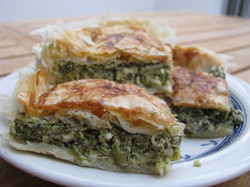