Someone pointed out that the ideal pan for pommes Anna was also the
ideal one for tarte Tatin.  So true.  So here it is, while you still
have the pan out.  Until now I’ve used the same pan for both.  However –
big news – I made my first foray onto eBay a few days ago and very
excitingly won the fancy copper pommes Anna pan!  For less than a third
its retail price – ha!  Hello eBay…!   The pan arrived today and is
stunningly beautiful.  My first copper!   (Please excuse all the
horrible exclamation marks, but this really has been an episode of great
excitement.)

Anyway, the tarte Tatin is a much more serious matter than the
prostitute’s favourite potatoes.  Its integrity is fiercely guarded by
the Lichonneux Brotherhood of Tarte Tatin, who reside in the tart’s
hometown of Lamotte-Beuvron in central France.  Check them out before
you bake – they’re worth it. 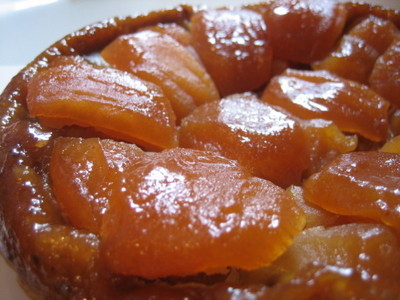 I made this classic French tart for the first time at school several months ago and have since made it several times at home as it is so easy and so delicious.  There are just two tricks:  1) Buy the right apples – they should be able to hold their shape during cooking.  Coxs’ Orange Pippin is supposed to be the best.  Here in the US I’ve had great success with Pink Ladies.  2) Work quickly when making and handling the dough so that the gluten in the flour does not get over-worked and the butter does not start to melt.

PS Some people asked what I was given to cook in my final exam.  Well,
we were presented with a duck (dead), some mushrooms, a bunch of chard
and several turnips.  Plus there were all the usual store cupboard
ingredients.  So, I made mushroom ravioli with a tarragon lemon butter
sauce, followed by ‘duck three ways’ (just to be fancy) – slow-roasted
leg, pan-fried breast, a little liver crouton and some ducky brandy
sauce – served with sauteed turnip slices with dates and garlicky
chard.  There was a recipe for a chocolate cake for dessert which fast
became the wonkiest cake I’ve ever seen.  The rest turned out OK.

Tarte Tatin can also be made with pears, peaches, pineapple, other fruit, or vegetables, such as onion.

However, this is heresy as far as the Lichonneux Brotherhood of Tarte Tatin is concerned, the official protectors and promoters of the tart.  If you were to so much as whisper plans to make a peach Tatin you would risk never being able to receive the Brotherhood’s medal and diploma, let alone wear their traditional blue smock, red scarf, hat and clogs.

I kid you not, check out http://lichonneux-de-tarte-tatin.over-blog.com/

If your tart turns out well, you could consider entering their annual tarte Tatin competition, held in Lamotte-Beuvron, the little town in central France from where the tart originates.  Or there is one in LA.

There are various silly stories as to how the tart was first happened upon, but it seems certain it was in 1889, at the hands of Stéphanie Tatin, who ran l’Hotel Tatin along with her sister Caroline.  Poor Stéphanie was a bit dim-witted, and on one of her dimmer days, before baking her usual apple tart, she accidentally a) over-cooked her apples on the stove, so quickly threw some pastry over the top, b) assembled her tart the wrong way up, or c) slipped and fell, dropping the tart upside down.  The choice is yours.  Anyway, the resulting tart was a huge hit with the customers and it was not long before a spy was sent to steal the recipe and take it to the fashionable Maxim’s bistro-cum-brothel in Paris, from where the tart was popularised.

Traditionally the tart is made by first cooking the apples in plenty of sugar and butter on the stove, and then laying on the pastry and baking until the insides are well caramelised.  This recipe is easier as a) you can better control the caramel and get it to the colour you want first, b) it’s quicker, and c) there is less risk of over-cooking the apples to a mush.  The downside, however, is that the apples shrink when cooking, leaving gaps between them.  If you were to cook them first, perhaps in batches, you could then squeeze more in to the final assembly.

I recommend pairing this tart with a sweet-ish Chenin Blanc from the Loire.