The milk of human kindness

We are in the Rodopi Mountains in southern Bulgaria, pondering why it is people here are said to live longer than anywhere else.  The fresh air and clean spring water?  The famous yoghurt (or “sour milk”, as it is classified here)?  Or perhaps what must be Bulgaria’s national dish – fresh salad piled high with excellent tomatoes, cucumbers and peppers – consumed in vast quantities. 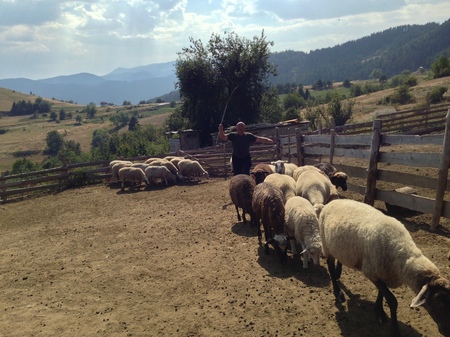 Having driven to Sofia for Matt to attend a conference, we decided to hang around afterwards to explore the mountains south and east of the capital.  Our previous experience of this country was limited, to say the least, and this needed rectifying.  Surely not everyone subsisted on green salad, rakia and cigarettes? 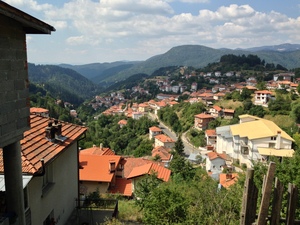 After a magical 24 hours in ancient Plovdiv (which reminded us of Safranbolu in Turkey, except that the old town feels more like a museum than the buzzing hive of craft activity that is Safranbolu) we headed south, deep into the green mountains.  Thanks to an anthropologist contact who I’d met in Sofia and our very kind hotel host’s impromptu interpreting skills, we were lucky enough to stay with the Danchevs, a sheep farming family in the pretty village of Momchilovtsi.  Here we learned all about their traditionally made feta-style cheese, and much more besides.  (“Feta-style”, or “white cheese”, since “Feta” can now only be applied to that made in Greece, a bone of contention this side of the border…) 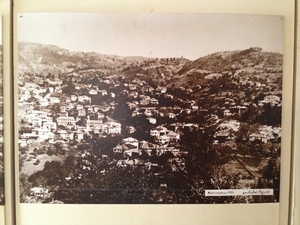 It’s a great anthropological story of continuity and change, tradition and modernity, all bound up in intriguing ways.  In the past these mountains were (over)grazed by hundreds of thousands of sheep.  Now, the Danchevs are one of extremely few families keeping sheep and making cheese.  A century ago, after locals eventually defeated the Ottomans (who’d controlled this part of the world for some half a millennium), new borders went up and shepherds could no longer practise long-distance transhumance to reach the Aegean coast of what is now northern Greece.  Without this lush winter pasture, sheep farming is far less viable a business, so numbers declined dramatically.  The forest is recovering, and people have largely switched to eating cow’s milk cheese. 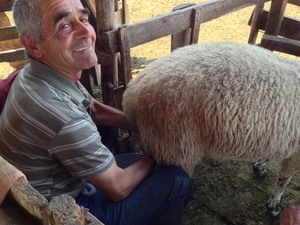 The Danchevs make it work by rearing two old breeds of particularly hardy mountain sheep – shaggy karakachan and cigai – that need less help in the cold winter months.  They are not favoured by other farmers since they yield less milk, but their milk is far richer in flavour and nutrients.  The afternoon milking we witnessed – 500 long-legged sheep efficiently passing through a specially designed wooden construction containing three shepherds on stools with buckets – yielded just 10 litres.  Life for a shepherd must be tough – these guys were just back from walking the pastures all day, along with shaggy black-and-white “karakachan” sheepdogs who were passive around us but apparently stand up to the wolves and bears who occasionally go for the sheep. 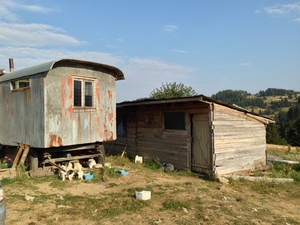 The Danchevs also opt to keep things simple.  They sell sheep’s milk, yoghurt and white cheese to a local market and are not interested in diversifying into hard and yellow cheeses since they are more costly to make, and locals mostly wouldn’t want to spend extra on them.  They have a special dispensation to continue to make unpasteurised cheese traditionally – no stainless steel or bleach in sight, just a wooden shack next to the sheep pens, with earth floor, wood fire and minimal equipment.  They are proud of the cheese’s simplicity – just fresh organic sheep’s milk, rennet and salt, and definitely no calcium chloride, which some cheese-makers add to make a firmer and longer-lasting cheese. 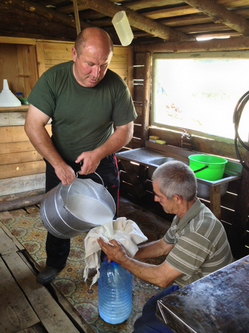 Dimitar Danchev and his father Stoycho showed us everything and generously gave up their time to explain their work.  Twice a day after milking, the curds are set with rennet (“yeast”) in a vat wrapped in an old duvet, then pressed in a wooden frame under the weight of two stones, then cut into blocks and salted.  (The trimmings from the press, by the way, tasted amazing – sweet, floral and incredibly more-ish.)  After a week, the salt is brushed off and the blocks preserved in a plastic bucket of strong brine.  No fridge required.  The process is similar to that we found being used by a Feta maker in Greece, but not quite the same. 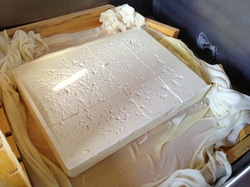 For special occasions, the Danchevs use juniper wood boxes instead of plastic buckets – more hassle, but, according to son Dimitar, an even better flavour.  And sometimes they make miahovo sirene, literally “bag cheese”, in this case heated curds mixed with ricotta made from the whey matured inside a sheepskin for several months.  This instantly reminded us of the brinză de burduf we’d come across in neighbouring Romania, and, it seems, is an almost extinct cheese in both countries. 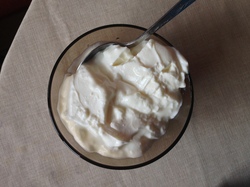 And then there is the kiselo mlyako, or “sour milk”, a Bulgarian product now so famous internationally it has become integral to national pride and of course cuisine.  In fact Maria Yotova, my new Bulgarian anthropologist friend who researches yoghurt, is about to visit the Danchevs herself with a visiting Japanese professor who is studying Bulgarian milk products.  In Japan, and also China, Bulgarian yoghurt – or rather, locally made yoghurt using the isolated strains of lactobacillus bulgaricus – is phenomenally popular, believed to be the key to a long and healthy life.  And it’s big business too, with Nestlé and the like involved in manufacturing the starter cultures. 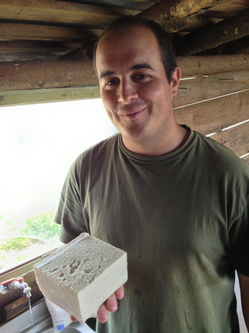 For the Danchevs, it seems, this interest and fame is pleasing, but in practice it is irrelevant.  The bacterial genie is out of the bottle, as it were, and exporting their yoghurt makes no sense.  In any case it is popular locally.  People love its thick rich texture and sour taste, quite unlike the sweet yoghurts popular in the UK.  The sweet style is referred to as “yoghurt” or “Danone” (after the international brand) here, in rather a derogatory way.  Bulgarian kiselo mlyako is better.  And we are happy to agree.

At the recent Slow Food “Cheese” event in Italy (a huge fair showcasing cheeses from across the world), father Stoycho told us he and his sheepskin cheese and traditional yoghurt stole the show.  With Stoycho’s massive smile, good humour and unhesitating forays into his own version of “esperanto”, we can well believe it.  Not to mention the fantastic products made from his super sweet and rich mountain sheep’s milk.  The Danchevs have since ended their relationship with Slow Food, for reasons beyond this little story. 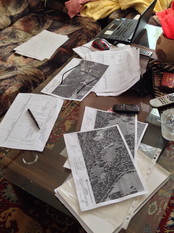 With one break of a few years, the Danchevs have continued the centuries old craft of their own grandfathers.  But this is also a very modern endeavour.  Their pastures and products are tested monthly by the state using the very latest in satellite and microbiology technology.  They are proud that their cheese is often found to be ‘cleaner’ than those made in large modernised factories.  And it is undoubtedly delicious.  But son Dimitar is not sure how long it will last.  A good shepherd is hard to find, and when I asked what would happen when their three current shepherds got too old to work, he indicated this wouldn’t be an issue as he suspected the sheep would be long gone by then. 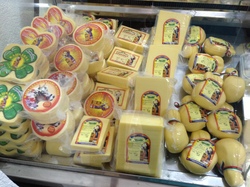 As an aside, we came across another cheese-making family a few villages away afterwards.  The contrast was striking.  They are enthusiastic members of Slow Food, having also attended “Cheese”, make at least ten types of cheese, including “parmesan”, “gruyere” and “tilsit” (…which seems odd given Bulgaria is in the EU…), specialise in these more expensive “yellow cheeses”, and sell nationally through major outlets in the likes of Sofia and Plovdiv.  They have cows not sheep, and no, we were not allowed to see how their milk was processed, since this was “forbidden” and very much behind closed doors.  This was disappointing, but I have to say that their house speciality of “baked cheese”, made from four cheeses, was absolutely delicious.  So here we have two very different approaches to making a living out of cheese in the Bulgarian mountains. 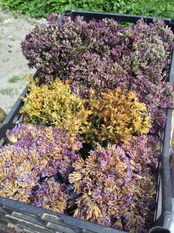 Back in Momchilovtsi, Dimitar was the ultimate host, making time to tell us the village history and take us up to natural springs, chapels and stunning view points, patiently answering my questions about the edible herbs growing on the hillside.  Wild mint, camomile, thyme and oregano are collected and dried to make “mountain tea”, while bilberries and lingonberries are foraged from the woods to make jam and other preserves.  I find myself wanting to live up a mountain. 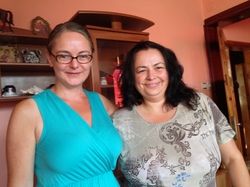 Naturally I also took the opportunity to learn some local recipes from mother Tsetsa Dancheva, many of which use their own dairy products, plus potatoes and dried beans – two vegetables grown by most people around here.  We didn’t have much language in common, and matters were complicated by the fact that like many Bulgarians Tsetsa shakes her head to indicate ‘yes’ and nods for ‘no’. But in the kitchen pointing, miming, sniffing and tasting go a long way, and luckily Tsetsa is a patient woman, not to mention an excellent cook who prides herself on being able to make any Bulgarian dish. 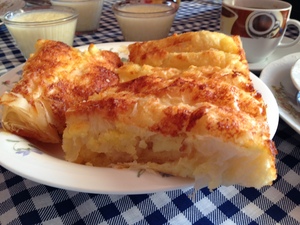 First up, the very popular banitsa, a filo pastry pie (remarkably similar to Turkish börek) stuffed full of cheese, yoghurt and clotted cream, in this case all from the Danchevs’ flock.  Even more delicious was kyopolou (a Turkish name if ever there was one) – a mixed “salad” of roasted peppers, aubergines, tomato sauce and garlic.  Then there was drob sarma, which reminded us instantly of haggis – but in this case the sheep’s innards (liver, lungs, heart, kidneys, caul fat) are mixed with rice and dried mint and baked in a dish.  Sarma in Turkish means something wrapped, and sure enough we discovered that drob sarma is traditionally roasted inside the sheep’s stomach bag.  Like haggis.  I guess upland sheep farmers around the world have come to some similar culinary conclusions.  And there was more too, including patatnik – a delicious grated potato and onion pancake a bit like rösti – and rice pudding, which locals eat dusted with cinnamon but I preferred with Tsetsa’s fantastic homemade bilberry jam, washed down with some of her freshly made raspberry cordial. 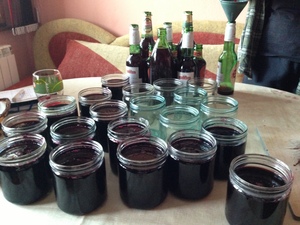 It’s been fascinating to find that many dishes, and words, here remind us of Turkey, while many others have more in common with the rest of the Balkans and eastern Europe.  Our few words of Serbo-Croat mixed with a few in Turkish and Romanian seem to get us by, to an extent…  Matt has of course mastered Cyrillic.  This is a fascinating part of the world and we intend to return to learn more one day.  Huge thanks go to the Danchev family for their incredible kindness.  We hope to meet again before too long.