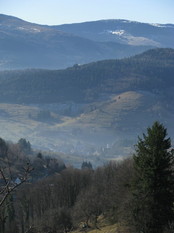 It’s not easy being an Alsatian cheesemaker.  Yes, you get to live in a beautiful valley in the foothills of the Vosges mountains.  And yes, you get to produce the traditional Munster Fermier, one of France’s tastiest (and smelliest) cheeses.

But tradition brings rules, regulations and responsibilities as well as tastiness (and smell) – not to mention expense.  And it’s not easy to make a living from cheese alone anyway.

We stayed with Chantal and Dany Roess at their farm in Soultzeren, where they make Munster (amongst other things), and they told us all about what they do, how they do it, and how they see their role as upholders of the traditions of cheese.

Soultzeren is a small village just outside the town of Munster, and the Roess farm is a mile or two outside up the hill.  They rent rooms, and it’s a lovely place to stay – especially because breakfast consists entirely of products from the farm itself (the only exception being the coffee).  They produce their own delicious milk, butter, bread, yoghurt, various jams – and, of course, the cheese.  Chantal also cooks in the evenings (although not on a Sunday – their one night off), while Dany looks after the milking, mans the farm shop and still manages to find the time to explain everything to curious tourists. 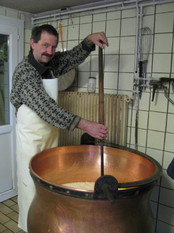 They make three main types of cheese (as do many farmers around here) – Munster itself, a soft washed-rind cheese, and two harder versions, the buttery Emmental-like Barikass and the tarter Tomme des Vosges – but they all begin in the same way.  The milk from their Montbéliard cows (they have about 40, of which 15-20 are milking at any time) is heated in a large copper cauldron with some rennet for around an hour while curds form.  These curds are then alternately sliced up and left to form again for about another hour.

For Munster, the curds can now be separated from the liquid whey and put straight into moulds.  The whey isn’t thrown away – it’s used to feed their pigs and young calves (although not the very youngest – it goes straight through them!).  For the Tomme, another heating is required in order to remove more liquid and end up with something more concentrated, harder and (perhaps surprisingly) more fatty.  For Barikass, even more heat is required. 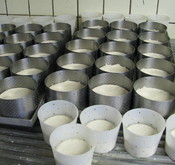 Once the cheese is in moulds (of various sizes depending on the type), it is left to rid itself of more water with the aid of a warm room, some salt and turning it upside down occasionally.  It can then be dated, blow-dried and moved to the cellars to age.

Of course, it’s actually a lot more complicated than that – the temperature and humidity of the cellars, the drying and aging times, the amount of salt added and so on are all vital, and changes in them produce the huge differences between the three different cheeses (as does the regular washing of the Munster rind, which prevents a white Camembert-style coating forming and encourages the right sort of bacteria to give it its distinctive taste).  And they’re all dictated by long experience and tradition.

In fact, these traditions contribute as much to the quality of the end product as do the raw materials.  The terroir is important – without good (raw) milk from good cows eating good grass they would get nowhere – but the methods mean even more.  Without keeping old cheese in the same cellars as new cheese, the all-important bacteria wouldn’t get transferred.  If they didn’t use wooden shelves and rough-walled rooms, the bacteria wouldn’t be able to find a suitable home.  If they disinfected their equipment, the bacteria would die – as they found out to their cost a few decades ago in a burst of enthusiasm for modernisation.

And so Dany sees his role as a farmer as more than just a producer of good food – he’s very conscious of his responsibility as a guardian of tradition and as an educator, passing this on to the next generation.  In fact, after we left, he was due to be showing the local schoolchildren around the farm, to do just that.

This isn’t just left up to his good intentions – as Munster is protected by the French AOC (appellation d’origine contrôlée) status (and now the European PDO equivalent too), it has to be produced according to these traditions if it’s legally to be called Munster.  This can be a double-edged sword – as well as preventing other less scrupulous cheese-makers from passing off lesser products as Munster, it does give him less room to experiment and forces him to comply with a lot of time-consuming legislation. (Expensive, too – certification to keep his farm producing about 8 tonnes of cheese a year costs him about €3,000).

But he also points out that sticking to traditional methods doesn’t have to mean that nothing ever changes.  Farmers in the Munster valley have only been making Tomme and Barikass for a few decades: as tourism in the area increased, the demand for cheese in the summer increased too.  Munster itself doesn’t keep very long, so they needed to create different versions which could be made in quantity over the winter and kept for summer.  With the advent of refrigeration, milk from the evening milking can be kept overnight and mixed with the morning milking – so Dany doesn’t have to make cheese twice a day the way his grandfather did.

The quality of the cheese has evened out too, as farming methods have improved.  There used to be a marked difference between cheese made in summer (when cows ate fresh lush grass from the high mountain pastures) and in winter (when snow in the hills meant they had to live off dried hay) – but these days, grass can be stored under plastic to give the cows tastier winter food (and us tastier winter cheese).  And he still has room to experiment with the recipes for his non-AOC cheese, adding various suitable local herbs and spices to his Tomme. 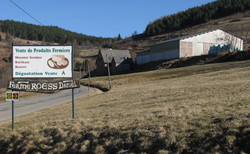 Of course, that may change one day, if Tomme des Vosges gets its own AOC status, and with it its own set of strict regulations.  But Dany sees both sides of the equation: protected status does bring its problems, including hard work and plenty of paperwork – but without it, it’s quite possible that farms like his, and cheesemaking traditions like that of the Munster valley, wouldn’t be able to survive.