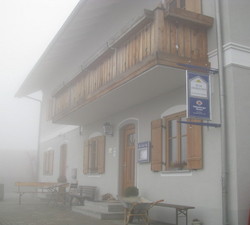 Having spent the morning cycling round the Bodensee in southwestern Germany (well, part of the way – it’s a big lake), and the afternoon crossing Germany on mind-numbingly boring motorways, we arrived at Deggendorf, a small town nestled beneath the foothills of the Bayerisches Wald, a little later than we’d meant to.

Every hotel we found was booked up or hideous (unless you’re planning a large corporate conference), or both.  It seemed the whole world had also decided to stop in Deggendorf and look for accommodation due to a nasty accident blocking the mororway.

When it had nearly reached the stage of seriously contemplating getting out the tent, I happened across a random reference on the internet to a guesthouse a little way out of town.  There were no details, no pictures, but I called and they had a room so off we went into the hills.  The roads became steadily narrower and windier, the villages smaller and darker.  Finally we reached our destination, not that we could see where we were as all was dark.  Inside the owner and a white-jacketed chef were seated at the table, apparently waiting for us – their only guests.

Within minutes, Gregor had brought us some drinks, the chef had jumped into action in the kitchen and all our apprehensions had vanished.  It transpired that we had stumbled across a fantastic little guesthouse, complete with a cheerful and chatty proprietor, fully-functional wood-fired oven and a small but delicious menu (as they all should be really) featuring local, natural and seasonal produce. If Chez Panisse were a small German guesthouse, it would look like this.

Gregor makes his own ‘griesen schmalz’ by slow cooking (for up to a full day) some fatty pork, then mashing it up with a few seasonal seasonings.  The result is a delicious fatty spread for bread, something like a cross between paté and rillettes with some extra fat.  Our sample was particularly good, he explained, due to the fact it was made from a special free-range pig he’d bought off his brother that was in fact half wild boar, half domestic pig.  Its fat is darker, tastier and better suited to such uses.  One day Gregor would like to club together with other guesthouses in the region to commission a local farmer to breed them specially.  Why can’t all guesthouses think like this?

After a delicious freshly-cooked dinner (Gegor is rightly proud of the fact that all his dinners are made from scratch – nothing comes from the freezer, deep-fat fryer, tin or packet), and more sampling of local pork specialities for breakfast, together with home-made bread and proper caffe latte (phew), we left thoroughly pleased with ourselves at having found Zum Horizont.  In the morning the whole hillside was shrouded in cloud, so we’ve still never seen where we were staying, but wouldn’t hesitate to recommend it to anyone travelling in the area.  Gregor can set you up with hiking trail maps, and he even has a sauna.  Had the Czech beer not been calling our names from over the hills we’d have stayed much much longer.