Grains and pulses make a classic combination, one found all over the world, from rice and beans in Latin America to millet and peanut sauce in West Africa.  No doubt these various pairings have evolved over the millennia due to their satisfyingly savoury flavours, their high nutritional value (the combination can cover all amino acid bases, in place of meat) and their ability to fill up the whole family at a low price. 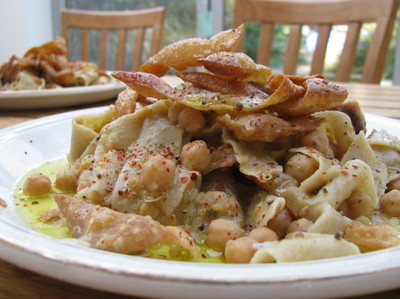 The traditional Puglian fare of ciceri e tria is one of these dishes – a wholesome mix of earthy chickpeas and wholemeal pasta strips.  ‘Ciceri’ are an old Puglian variety of chickpea, slightly and smaller and tastier than the regular ones.  ‘Tria’ is an old word for pasta, coming from the Arabic word ‘ittriya’.  Comparable dishes are found all over Italy, such as the pasta e fagioli from Emilia in the north.  But ciceri e tria, also known as cece e ttria, cicerittria or similar, is particularly intriguing due to its mysterious ancient origins, which link in to the whole debate over the origins of pasta itself.  One clue might lie in the fact that some of the pasta, unusually, is fried, while the rest is boiled.

We had a wonderful bowl of ciceri e tria at Anna Carmela’s fantastic trattoria ‘Le Zie’ in Lecce soon after we’d arrived off the boat from Greece on our culinary road trip of Europe in 2008.  It was the perfect introduction to our Italian food investigations, raising all sorts of questions about continuity and change in Puglia, its regional distinction from the rest of the Italian peninsula and links to the medieval Arab world.  We didn’t even realise then that we’d be musing on ciceri e tria again four months later in Morocco when we found a strikingly similar dish there called ‘trid’…