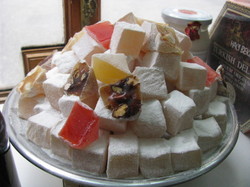 Drinking tea all day has contributed towards to the sweet tooth I seem to have developed in Turkey, as the little glass is always served with two sugar lumps on the side.  (Except in the Southeast, where you usually get three – Southeasterners liking their foods generally spicier, sweeter and tangier than their equivalents in the rest of the country.)  Sugar is found in large doses in many of the Turks’ favourite foods… 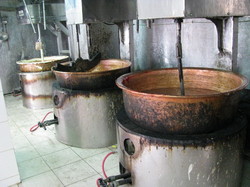 Think about baklava, Turkish Delight (lokum) and helva for example.   In Safranbolu we saw the Safrantat lokum factory’s enormous copper cauldrons, in which vast quantities of sugar (more than 500kg per day, in fact) are melted with cornstarch, citric acid and water to make the soft, chewy candy we call Turkish Delight.  And in Gaziantep we watched as the master bakers in Mahmut Güllüoglu’s artisan baklava bakery ladled gallon after gallon of sugar syrup over the trays of hot baklava fresh from the wood-fired oven. 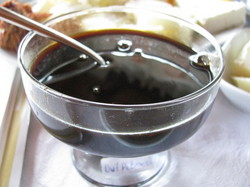 Fruits and even vegetables are preserved in sugar.  There are hundreds of home-made jams, marmalades and syrups all over Turkey, including one of our favourite Turkish treats of all time – pekmez – which is usually made from grape juice but can also come in mulberry, apple, carob, fig and even sugar beet varieties.  Pekmez actually does not have any sugar added, but is intensely sweet as it is made by reducing the fruit juice/infusion over a fire or under the hot sun until it reaches a syrupy consistency due to its natural sugars.  Yum. 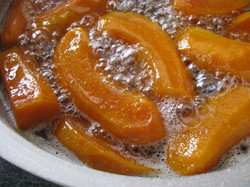 Equally fascinating to us is the technique of preserving unlikely candidates such as pumpkin, aubergine, tomatoes, green walnuts and unripe figs in sugar syrup.  You might think it sounds disgusting, but believe me – a small piece of candied butternut squash or aubergine after dinner is delicious.   We’d heard that this used to be done in Romania, (but is now only made there with more likely candidates such as strawberries and cherries).

Most intriguing is how the texture of the vegetables is preserved:  in the case of squash or aubergine, the raw pieces will be soaked in a solution of water and slaked lime (as in the white stuff you can get down the building site) for several hours, rinsed well, briefly cooked, then left to simmer gently in a sugar syrup until every cell is translucent with sugar.  The result is perfectly shaped cubes, wedges or rounds of vegetable which are soft on the inside but firm and almost crunchy on the outside.  Having tried these sweet morsels all over Turkey and even heard of them in Romania (where the Ottomans had left behind the practice) I was delighted to get the chance to make a batch of kabak tatlısı with chef and food writer Engin Akin at her home in Istanbul just before we left Turkey.