Now that we’ve spent some time in Turkey, some in Romania and Bulgaria before that, and now some in Greece, it’s been interesting to try to spot various culinary connections between them.  It’s not all pleasant, but they have a lot of shared history via the long presence of the Ottoman empire in Eastern Europe.  Greece was under Ottoman control for hundreds of years; and while Romania (and especially Transylvania) was nominally independent for much of that time, the word “nominally” should be stressed. 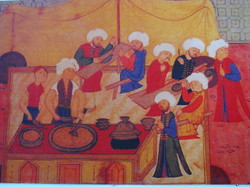 Ottoman chefs: could they tell their
aubergines from their tomatoes?

In some cases, of course, there are clear similarities in techniques and ingredients, but there’s really no way to know whether Romanians influenced Turks, or Turks influenced Romanians, or whether they both just thought that spicy meatballs tasted nice.  But in others, you can get some help from the language: if a stuffed vine leaf in Greece has an originally Turkish name, the odds are that it has at least some Turkish origins.

But sometimes we have to do a bit more detective work.  In Romania, the word for tomato is “red” (roşie), and the word for aubergine is “purple” (vinete): so you might ask your greengrocer for a kilo of reds and a kilo of purples.  This does sort of make sense – tomatoes are red, after all, and aubergines are purple – but why just these two?  They don’t call cucumbers “greens”.  And tomatoes certainly aren’t the only red things in a Romanian kitchen, what with all those peppers around.  Well, a conversation with Anca in the Carpathians, a conversation with Özge in Istanbul, some dictionary work, and all became clear …

In some cases, like the aforementioned meatballs, I really don’t know what happened.  Turkish people make delicious spicy lamb balls called köfte; Romanians make very similar ones called mici.  Are they related?  I have no idea.

But in other cases, the names are a dead giveaway.  Ladies and gentlemen of the jury, I give you … the stuffed vine leaf.

In Turkey, the term for something rolled or wrapped is sarma (sarmak means “to wrap”), and the ubiquitous stuffed leaves are therefore called yaprak sarma (“leaf rolls”).  Being so common, this often gets abbreviated to just sarma.  As these moved with the Ottoman armies into Romania, I suspect the recipe moved with them, and the name did too: in Romanian they are known as sarmale.  (Which doesn’t mean “to wrap” in Romanian – or anything else other than “stuffed vine leaf”).

The actual rolls themselves are not necessarily so similar any more, as ingredients vary with the climate and culture.  Romanians are more likely to use cabbage leaves (at least in the north – as you move south, the climate is perfect for vines and winemaking, and vine leaves turn up again); and they’re more likely to use pork and local herbs, where Turks might use old Ottoman palace ingredients like currants, pine nuts and allspice.  But the name has stuck.  Same in Bulgaria, by the way: they call them сърми (“sarmi”).

What about Greece, though? I hear you cry.  They stuff vine leaves there too – but don’t they call them dolmadhes?  Well, yes they do – or if they’re small they add a diminutive suffix and call them dolmadhakia.  But a quick look at your Turkish dictionary will show you that the Turkish term for something stuffed is dolma (dolmak means “to fill”).

Occasionally you’ll see leaf rolls called dolma in Turkey, too, but they tend to reserve the term for proper stuffing (like stuffed peppers, biber dolması), and use sarma when it’s actually wrapping.

And in fact, having now spent some time in northern Greece, I can tell you that they don’t always call them dolmadhakia.  Sometimes they call them – wait for it – sarmadhakia instead.  Case closed, I think.  And further west in (Greek) Macedonia, they might even call them yaprakia.  The defence rests.

But it’s not always this easy.  We turn to the case of the red tomatoes.

It would make sense if both “red” (roşie) tomatoes and “purple” (vinete) aubergines were introduced to Romania by the Ottomans.  Tomatoes didn’t appear in Europe until after Europeans found them in America in the 15th century, by which time Ottoman influence was well established all across the Balkans; aubergines started off in India and moved west via Arabia, not reaching Europe until about the same time.  But this wouldn’t explain the names on its own anyway: in Turkish, aubergines are called patlıcan (“pat-luh-jan”), and tomatoes domates.

Well, after piecing together discussions with Anca in Romania and Özge in Turkey, we found out what happened.  When tomatoes were introduced to the Ottomans from the New World, they were seen as a new foreign kind of aubergine (the plants are related), and therefore called frank patlıcan (“Frankish” or  “European” aubergine).  When the Turks then took their two kinds of “aubergine” north to Romania, it presumably didn’t make much sense to call one of them “European”, so people distinguished between them by calling one the “red” aubergine (patlăgică roşie) and one the “purple” aubergine (patlăgică vinete).  Pretty soon they dropped the patlăgică (“pat-luh-jica”) bit and so the names just ended up being “red” and “purple”.

(In the mean time, of course, the Turks had realized that tomatoes weren’t really Frankish aubergines at all, and sensibly started calling them domates instead.)

And that’s how the aubergine got its name.  If you’re Romanian, anyway.  Next up: not everything started in Turkey (although the Ottomans were usually involved somewhere along the line) – the case of the submarine …